Ariel, the Atmospheric remote-sensing infrared exoplanet large-survey mission, addresses one of the key themes of ESA’s Cosmic Vision programme: What are the conditions for planet formation and the emergence of life? Ariel will study what exoplanets are made of, how they formed and how they evolve, by surveying a diverse sample of around 1000 planetary atmospheres simultaneously in visible and infrared wavelengths.

It is the first mission dedicated to measuring the chemical composition and thermal structures of exoplanets, linking them to the host star’s environment. This will fill a significant gap in our knowledge of how the planet’s chemistry is linked to the environment where it formed, or whether the type of host star drives the physics and chemistry of the planet’s evolution.

Observations of these worlds will give insights into the early stages of planetary and atmospheric formation, and their subsequent evolution, in the process also helping us to understand how our own Solar System fits into the bigger picture of the overall cosmos.

Ariel was selected in 2018 as the fourth medium-class science mission in ESA’s Cosmic Vision plan. It was ‘adopted’ by ESA during the Agency’s Science Programme Committee meeting on 12 November, paving the way towards construction. “Ariel will enable planetary science far beyond the boundaries of our own Solar System,” says Günther Hasinger, ESA’s Director of Science. “The adoption of Ariel cements ESA’s commitment to exoplanet research and will ensure European astronomers are at the forefront of this revolutionary field for the next decade and well beyond.”

Ariel will be ESA’s third dedicated exoplanet mission to launch within a ten-year period, with each mission tackling a unique aspect of exoplanet science. Cheops, the CHaracterising ExOPlanet Satellite, launched in December 2019, is already producing world-class science. Plato, the PLAnetary Transits and Oscillations of stars mission, will be launched in the 2026 timeframe to find and study extrasolar planetary systems, with a special emphasis on rocky planets around Sun-like stars in the habitable zone – the distance from a star where liquid water can exist on a planet’s surface. Ariel, planned to launch in 2029, will focus on warm and hot planets, ranging from super-Earths to gas giants orbiting close to their parent stars, taking advantage of their well-mixed atmospheres to decipher their bulk composition.

In the coming months, industry will be asked to make bids to supply spacecraft hardware for Ariel. Around summer next year, the prime industrial contractor will be selected to build it.  The mission’s payload module, which includes a one metre-class cryogenic telescope and associated science instruments, is provided by the Ariel Mission Consortium. The consortium comprises more than 50 institutes from 17 European countries. NASA also contributes to the payload.

“After an intensive period working on the preliminary design concepts and on the consolidation of the required technologies to demonstrate the mission feasibility, we are ready to move Ariel forward to the implementation stage,” says ESA’s Ariel study manager Ludovic Puig.

What Ariel is looking for 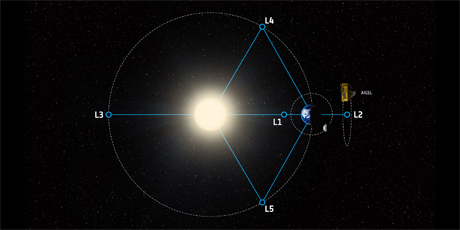 Ariel will be placed in orbit around the Lagrange Point 2 (L2), a gravitational balance point 1.5 million kilometres beyond the Earth’s orbit around the Sun. Image Credit: ESA/STFC RAL Space/UCL/Europlanet-Science Office

The telescope’s spectrometers will measure the chemical fingerprints of a planet as it crosses in front of – ‘transits’ – its host star, or passes behind it – an ‘occultation’. The measurements will also enable astronomers to observe the dimming of the host star by the planet with a precision of 10–100 parts per million relative to the star.

Ariel will be able to detect signs of well-known ingredients in the planets’ atmospheres such as water vapour, carbon dioxide and methane. It will also detect more exotic metallic compounds to decipher the overall chemical environment of the distant solar system. For a select number of planets, Ariel will also perform a deep survey of their cloud systems and study seasonal and daily atmospheric variations.

“With Ariel we will take exoplanet characterisation to the next level by studying these distant worlds both as individuals and, importantly, as populations, in much greater detail than ever before possible,” says ESA’s Ariel study scientist Göran Pilbratt.

“Our chemical census of hundreds of solar systems will help us understand each planet in context of the chemical environment and composition of the host star, in turn helping us to better understand our own cosmic neighbourhood,” adds ESA’s Ariel project scientist Theresa Lueftinger.

“We’re pleased to enter the implementation phase of the Ariel mission,” says ESA’s Ariel project manager Jean-Christophe Salvignol. “We’re moving towards the optimal spacecraft design for answering fundamental questions about our place in the cosmos.”
Ariel is planned for launch on ESA’s new Ariane 6 rocket from Europe’s spaceport in Kourou, French Guiana. It will operate from an orbit around the second Sun-Earth Lagrange point, L2, 1.5 million kilometres directly ‘behind’ Earth as viewed from the Sun, on an initial four-year mission. The ESA-led Comet Interceptor mission will share the ride into space.

Ravit Helled on her role in the Ariel ESA mission

Prof. Ravit Helled from the Institute for Computational Science, Center for Theoretical Astrophysics & Cosmology is part of the consortium of the recently adopted Ariel ESA mission. She is co-leading the "Interiors" working group of the mission which aims at characterizing the planets to be observed by the Ariel mission. She is also part of the "Formation" working group which aims at understanding the formation and evolution of planets around other stars.  Helled says: "Understanding the link between the bulk composition and atmospheric composition of planets and how they are linked to planetary origin is a key topic in planetary and exo-planetary science and we focus on these questions. Also, determining the atmospheric composition of planets, as will be measured by Ariel, is critical for constraining the planetary bulk
composition, which can then be linked to its formation process and planetary evolution. I think it is great that we have a Swiss representation in such an important ESA mission. I am excited to be part of the Ariel ESA mission and I look forward to the excellent science and collaborations. "