Charles Darwin was puzzled by the looks of the Niata cows . Today the Niata is extinct and it seemed that the questions concerning this animal would remain unanswered. ​Based on an ancient skull UZH paleontologists were now able to proof that the Niata was a true breed and did not suffer from breathing problems due to its shortened facial skull. 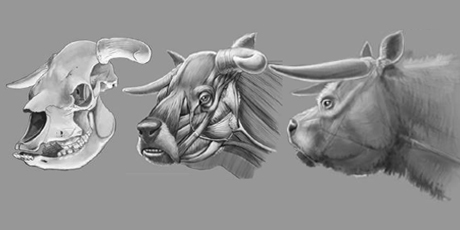 A bulldog is a peculiar kind of dog. What very few people know is that among cattle, a cow existed which looked very similar in the shape of its face: the Niata cow. Charles Darwin saw this strange animal during his travels in South America, as he visited the Argentinian Pampas and areas around Buenos Aires. He wrote about it and posed questions about its  true nature: its anatomy and relation to other cows, its functioning in view of the peculiar shape of its head. From the now extinct Niata is only a very limited number of skeletons and skulls still exist in few collections around the world.
Roughly two hundred years later, an international team of researchers from Australia and Switzerland have revisited Darwin’s questions.Their multidisciplinary approach is the first of its kind to study this strange animal. The researchers used non-invasive imaging and also successfully extracted DNA to study the relationships of the Niata cow, in the laboratory of Lukas Keller. «Domestication serves as a model to investigate evolution in the wild, an observation that has fascinated and challenged scientists since Darwin», says co-author Marcelo Sánchez.
Based on anatomical and genetic data the researchers were able to confirm Darwin’s suggestion that the Niata is a true breed, with unique cranial features. The DNA samples indicates that the Niata is related to taurine cattle. The results of the anatomical study show that although the face of the Niata cow is shortened and there is an underbite, the nose regions were not really impacted by these changes, and the Niata, in contrast to the extreme cases of bulldogs, did not suffer problems with breathing. The researchers also used state-of-the-art computational modelling techniques to see whether the short face affected how well the Niata could chew food compared to other cattle, showing that during feeding the Niata experienced smaller amounts of stress on its skull bones.

Domestication has resulted in changes to the appearance of many mammals, and a large amount of variation is evident among different breeds, with crosses common, as is reported for example between Australia’s native wild dog, the dingo, and domestic dogs. The Niata cow represents an example of extinction of rare breeds. Understanding aspects of its biology allows scientists to better understand how threatened species may be supported.