Transportation of certain molecules into and out of the cell nucleus takes place via nuclear pores. For some time, detailed research has been conducted into how these pores embedded in the nuclear envelope are structured. Now, for the first time, biochemists from the University of Zurich have succeeded in elucidating the structure of the transportation channel inside the nuclear pores in high resolution using high-performance electron microscopes. 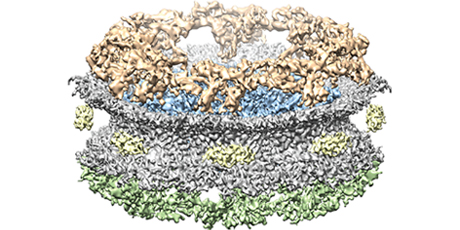 An active exchange takes place between the cell nucleus and the cytoplasm: Molecules are transported into the nucleus or from the nucleus into the cytoplasm. In a human cell, more than a million molecules are transported into the cell nucleus every minute. In the process, special pores embedded in the nucleus membrane act as transport gates. These nuclear pores are among the largest and most complex structures in the cell and comprise more than 200 individual proteins, which are arranged in a ring-like architecture. They contain a transportation channel, through which small molecules can pass unobstructed, while large molecules have to meet certain criteria to be transported. Now, for the first time, an UZH research team headed by Professor Ohad Medalia has succeeded in displaying the spatial structure of the transport channel in the nuclear pores in high resolution.

“Molecular gate” discovered in pore channel
For their study, the scientists used shock-frozen specimens of clawed frog oocytes. With the aid of cryo-electron microscopes, Medalia’s team was able to display the miniscule nuclear pores, which were merely a ten thousandth of a millimeter in diameter, at a considerably higher resolution than ever before. As a result, they uncovered new details: “We discovered a previously unobserved structure inside the nuclear pore that forms a kind of molecular gate, which can only be opened by molecules that hold the right key,” explains Medalia. This “molecular gate” is the so-called spoke ring, which is sandwiched between two other rings and extends inside the nuclear pores. The gate itself consists of a fine lattice, which enables small molecules to slip through unobstructed.

Cryo-electron microscopy at the University of Zurich
Cryo-electron tomography is a method to render cell structures three-dimensionally visible in their natural environment in high resolution using both electron microscopy and computer imaging. The cells are shock-frozen in liquid nitrogen at minus 190 degrees. The cell structures remain intact in a quasi-living state, which means that they no longer need to be pre-treated with harmful chemicals. Extremely powerful electron beams also enable scientists to study thick sections or entire flat specimens (up to approximately 500 nm).

Ohad Medalia, a pioneer in the field of cryo-electron microscopy, was appointed as a Professor of Biochemistry at the University of Zurich in 2010. Thanks to the generous support from the Mäxi Foundation, two high-performance electron microscopes of the type “Polara” and “Titan Krios” could be purchased. Today, they are operated together with UZH’s Center for Microscopy and Image Analysis and have expanded UZH’s range of technology considerably.